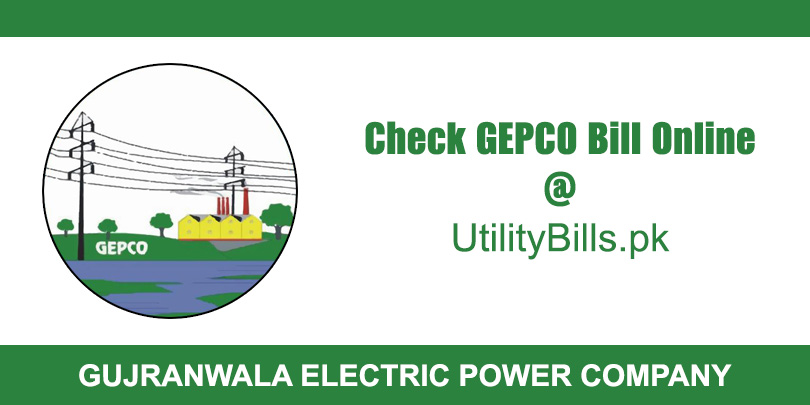 Juggling between work life and paying many utility-bills every month can be tricky, especially for people having full-time jobs. If you lose your bill in the middle of all that then it worsens the situation and it becomes impossible to pay within the due date. That’s because, you would have to reach out to the service provider and manually get the duplicate for which you don’t have enough time during the workdays — plus, the offices are open at the same time window resulting, thousands of people failing to satisfy the payments before deadlines. So as a solution, here we introduce our online service to check and get the duplicate GEPCO bill online by following some simple steps which are discussed later in this article.

Initially, the system was all about slow management, unreliable and inconvenient procedures where the customer must stand in endlessly long queues. But with the dawn of the digital age, the time changed drastically. As an aftermath of the internet, e-billing techniques were introduced and successfully implemented in the market.   But unfortunately, they weren’t accepted widely at first, given the fact that people were reluctant to absorb the change.

Eventually, as the system became more reliable, the popularity escalated and as a result, the latest e-billing means replaced the age-old ways. And our online service is the by-product of these many years of digital advancement.

Moreover, Pakistani people are rapidly adopting digital means of transactions and according to the State bank of Pakistan, RS 3,71 trillion were collected between 2016-2017 alone. The e-commerce industry is estimated to expand, having $26 billion of worth by 2025 — as per the McKinsey Global Institute report. This vividly exhibits the country’s potential of digital finance in near future.

It wouldn’t be inaccurate to state that GEPCO or Gujranwala Electric Power Company is one of the oldest electricity providers in our country. After the disintegration of the Water and Power Development Authority many AEB or Area Electricity Boards emerged and GEPCO was one of them. It was recognized as a separate entity back in 1998 And commenced its business around after receiving the electric power distribution license from the National Electric Power Regulatory Authority (NEPRA).

Since then, it has been facilitating the districts of Gujranwala, Sialkot, Hafizabad, Narowal, Mandi Bahauddin, and Gujrat. Within these operational circles, the company directly influences the lives of 15.50 million people, including the industrial sector. As per the stats, GEPCO has over three million consumers with an average revenue of 8937 Million Rupees monthly.

Do you know how many times your service provider has overcharged? Well, most probably you don’t. That’s because many of us do not know how to recheck the billing calculations. This inability allows the sellers to rob you of the electricity you never utilized.

The problem lies in the fact that the system incorporates a good deal of human input. Hence, the risk of human error is always at large. To minimize overpaying, rechecking the calculations is crucial. For that, you need to understand these components of your utility bill;

In addition to name and address, the company relies on many other unique codes for the identification. These computer-generated sets of figures act like a digital ID that sets your electric channel apart from the rest. Let’s have a closer look at what they represent:

You might have already figured this component out but let’s recall:

As you can witness below, a huge chart displays total electricity consumed for a whole year. For every month the unit value is given, along with the total amount owed and paid. In case of missed payments, the blank will be replaced by a zero and the one has to pay the cost along with the additional charges in the next installment. If the null value continues, it means the connect has been canceled.

Here the total payable amount is estimated. The process initiates with meter reader noting down the units from your meter manually. Next, by simply subtracting the previous and current month’s value, total units consumed are calculated. Using this, the electricity cost per unit consumed is determined — Not to forget that the cost varies greatly between residential, industrial, and commercial sectors, plus the cost fluctuates as per the market trend. In the end, the final value is computed by adding various service and goods charges and taxes imposed by the government; including GST, N.J surcharges, and L.P Surcharges. 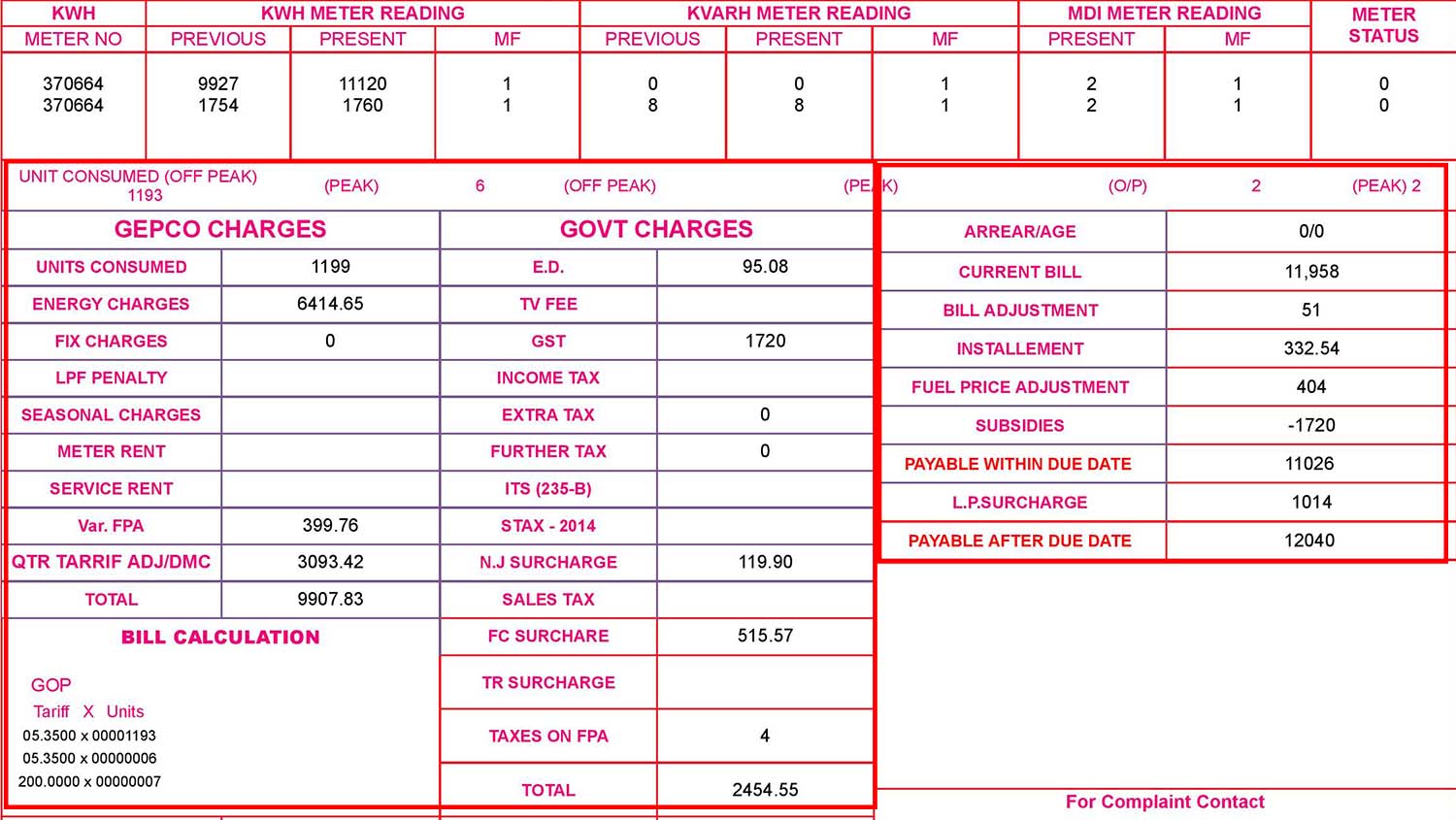 In case you find out any error in your utility bill, you can contact the provider using the information indicated below. Also, the company can help you fix various other problems like canceled connections, meter malfunctions, disconnected transmission lines, and power blackouts. Moreover, you can also notify them of electricity theft and other fraudulent acts using this information.

Why should you review the online bill GEPCO before paying?

Even though the billing system in Pakistan is now more efficient than ever, it still has many flaws. Here are a few common errors that a consumer may encounter:

How to check the online GEPCO bill?

Our service changes the way you used to retrieve a duplicate for your lost bill. Just follow these simple steps for to check GEPCO bill online from not only Gujranwala but all around the country:

This method is valid for retrieving IESCO electric bills, PESCO online bills and bills from other power distributing companies.

How to pay utility bills in Pakistan?

Over the course of many years, numerous billing ways emerged. Here are a few popular of them:

No need to get exhausted standing in never-ending queues; as through online banking facilities you can satisfy the payments from home. First, you would need to reach out to your respective bank and get a registration. The bank will provide you an online account to digitally manage the payments. However, the service may require an additional fee which varies within various banks.

On the contrary to what some people might say, this method is safer than the traditional one. Moreover, it is convenient, environment-friendly, cost-effective, and best of all, it saves a good deal of one’s time. But one thing that you need to keep in mind is that not all banks offer this convenient service for all types of bills. For example, AKPL doesn’t accept FESCO electricity bills. Therefore, research well before proceeding.

Many brands such as EasyPaisa (launched in 2009) and JazzCash (Initiated in 2015) are now offering e-billing services. In case you don’t have an account, you would then have to visit the nearest outlet to pay the bills with one huge benefit; that these outlets don’t usually have long queues. Plus, the service is faster and more reliable. The customer also gets a confirmation receipt in the end.

EasyPaisa alone has 7.4 million customer base which is believed to be doubled in coming years. The service provider is hoping to expand its network boundaries and reach far out corners of the country.

From this point forward, say goodbye to standing in long queues; as with our online facility you can retrieve a duplicate of your lost bill from home. Just pay heed to the above-discussed billing components and follow the mentioned procedure to bring ease in your life.

You can also check the Electricity bills for the desired city of Pakistan from the options below: